On Tuesday, November 26th, at the AHS boys basketball home opener against Pendleton Heights, the Indians will be hosting “Phil Buck Night” at the Teepee to honor the late coach.

Coach Buck was inducted into the Indiana basketball hall of fame in 1983 after 37 years of coaching. During 24 seasons at Madison Heights, Buck won nine sectionals, four regionals and a semi-state title. In all, he won 495 games and 13 sectional titles.  Buck coached one Indiana Mr. Basketball (Ray Tolbert- 77′) and several Indiana All-Stars.

Anderson will honor Coach Buck with a ceremony on the court of the Teepee at 7:15 pm, in-between the Junior Varsity and Varsity games, with a reception to follow the varsity game in the AHS cafeteria with the Buck family. 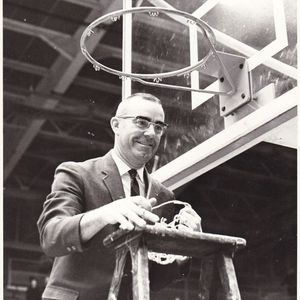