The lady tribe basketball team dropped their home opener against Pike Tuesday night, 57-35.  Erin Martin led the Indian’s scoring with 10, followed by Kalie Vaughn with 8 and Karlie Goodwin with 6.  Goodwin also led the team on the boards with 10 rebounds.

The lady tribe was plagued by turnovers in the first half, with 14.  Troubled by a relentless full court attack by the Red Devils, Anderson went into the locker room down 31-13.  After some halftime adjustments they were able to cut back the turnovers and were only outscored 26-22 in the second half.  “With {Tyra} Ford out, we knew we would have to rely on some young talent to stay competitive with them.  I think we had some young girls really step up” said Tribe Coach, Shannon Cleckley.  Making those adjustments and seeing underclassmen play with that level of competition is a major step in the right direction for a lady tribe squad who is faced with ranked opponents in each of its first three games.

Anderson will host the #6 ranked Wildcats of Lawrence North in their next contest.  The game will be at AHS with JV tipping off at 12:00pm and varsity to follow. 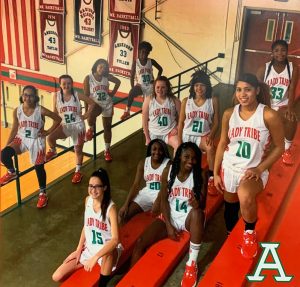