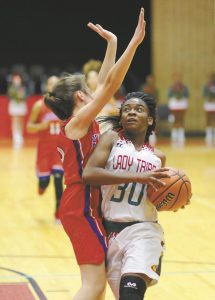 ANDERSON — It took a few possessions for the Anderson pressure defense to take hold. But, when it did, Staisha Hamilton and the Indians converted again and again.

With the win, Anderson improved to 2-5, while Kokomo dropped to 1-5 with its third straight loss.

“We needed to come out hot,” Anderson coach Shannon Cleckley said after his team snapped its own two-game skid.

Leading 9-8, Hamilton converted one of 12 first-quarter Kokomo turnovers into a 3-point basket as the Indians outscored the Wildkats 16-2 the rest of the first quarter, which ended on a fourth Hamilton trey.

“That’s what we concentrated on in practice, they listened, and they came out and did what they were supposed to do,” Cleckley said. “The pressure caused some nice turnovers, but the key was that we were able to convert off of those turnovers.”

The Indians converted those first-quarter turnovers into 17 points. Hamilton scored 14 of her game-high 16 points in the opening frame and said Anderson’s pressure defense helped her get into an early shooting rhythm.

The run continued in the second quarter when sophomores Tyra Ford and Makyra Dixon scored on rebound baskets before layups by Dixon and Hamilton capped the run, and the Indians held a 33-12 lead on their way to a 45-19 halftime advantage.

Hamilton, despite averaging 16 points , is often overshadowed by the play of Ford. She’s OK with being under the radar and loves to prove people wrong.

The Tribe received a bit of a scare early in the fourth quarter when Ford, who entered the game as Anderson’s leading scorer at 22.5 points per game, turned an ankle making a defensive stop. After spending several moments on the floor, she limped gingerly to the sideline under her own power. Cleckley does not believe the injury to be serious and is hopeful Ford will be available next week when Anderson hits the road for two more conference games at Marion on Tuesday and Harrison next Saturday.

“It looks like a slight sprain, nothing too major,” he said. “She’s going to be icing it the next few days, and we have a few days for her to rest it.”

In addition to Hamilton, Anderson had three other players in double figures. Ford scored 14, Karlee Goodwin had 12 and Erin Martin added 10. Martin also handed out four assists and had four steals.

“We’ve been talking to the girls about next girl up,” Cleckley said. “It’s a long season. People can get injured. Lots of things happen. Those three came off the bench with some very quality minutes.”

Anderson also topped Kokomo in the junior varsity contest by a 44-38 score. Williams and freshman Kaylie Vaughn led the Tribe with 12 points each.