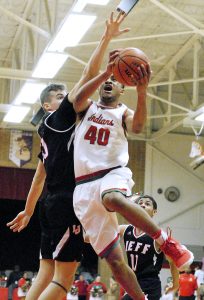 The Indians won a sectional game for the first time since 2014-15, shocking Noblesville 74-69 in double overtime last February. With 11 victories in 25 games, Elliott made an impact by steering the Tribe back into the win column during his first season at the helm.

To put the Indians’ 2017-18 win total into perspective, no other team since the 16-6 squad in 2012-13 had eclipsed more than nine Ws as the program spiraled at 22-72 the past four seasons under four different head coaches.

But Elliott is looking beyond that, and he’s carried it with him.

“I feel like from a personal standpoint, I left that county championship in Pendleton (last year),” he said. “Getting beat by Fishers (in the sectional semifinals), and we beat Fishers earlier in the year, that left a bad taste in my mouth that I had to hold the entire summer and fall now. I took that to heart. I felt I let them down a little bit.”

The plan for Year 2, Elliott said, begins where the Indians left off nearly nine months ago – moving forward, changing the culture and rekindling the winning tradition of the past.

“At the end of the year last year, they were totally bought in. We were playing really good basketball for the first time we were together, so it was exactly where I wanted it to be,” Elliott said. “It was a conversation of this is where you want to be; this is how you get there; this is what happened before, and you didn’t like that; so let’s not do that anymore.”

Jones averaged 9.3 points per game as a sophomore, ranking third best on the team, while shooting 34 percent from 3-point range. Haralson wasn’t far behind at 8.4 ppg and 4.3 rebounds on average.

“I’m really excited because they already exemplified the leadership that we need, and their maturity and growth is what excites me,” Elliott said. “They were in the program last year, new situation, new coach, and they sort of took that torch and ran with it. The younger guys or less experienced guys have followed their lead.”

Haralson is an all-around player, contributing across the board last year with nearly two assists and two steals per contest, which fed directly into Anderson’s up-tempo style. He shot 50 percent from the field and 71 percent from the foul line.

“I can definitely see him being first-team all-county, first-team all-sectional,” Elliott said. “He put in a lot of work in the summer and preseason. I think he can be really good. He does everything. He’s just that guy.”

Turner can become the future. Already ahead of the game as part of Team Teague during the AAU season, the up-and-comer has earned the respect of his older teammates and could see heavy minutes if he brings consistency at guard.

“Throughout our scrimmage and red and green game, I couldn’t keep him off the court,” Elliott said. “Sometimes as a coach, you can’t be stubborn. He’s a freshman and should have to wait his turn, but that’s not me. I’m about, if you can help us win right away, you’re going to play.”

Jesse Sawyer, a 6-2 senior, along with 6-3 classmate Arriyone Hall are projected to anchor the starting lineup with 6-3 senior Tristen Lyons.

“They like our style of basketball better. Yes, it comes with some discipline and challenges them to get rid of some bad habits and forming new ones,” Elliott said. “I’d really like to get to .500, to be realistic. We have a really tough schedule. There’s no rest for the weak there. I’ll take .500. Of course, I’ll take a winning record, but I’m looking at it from a realistic standpoint.”

The recipe for building from an 11-14 record is to capitalize on lessons learned such as Anderson’s 74-51 loss to Pendleton Heights in the Madison County Tournament final and their sectional letdown last season. Anderson has won 51 sectional titles in program history with its last championship in 2008-09.

“They always think they can do more, and I encourage them to do more,” Elliott said. “We haven’t really talked about sectional yet. I think we’re more in the moment right now and just enjoying the process of getting better.”

Anderson opened with a 65-63 win at PH Tuesday and will host Lapel on Friday night.