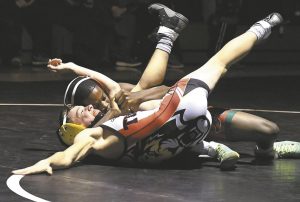 ANDERSON — Alexandria got a jump on Anderson as far as opening the wrestling season, with five dual matches Saturday at Elwood.

It took Anderson a little more time Monday night to get to where it desired, but the Indians got there 48-30 in a match that had a lot of quick resolutions — 11 falls in 13 matches.

The Indians had seven pins, three by brothers Romeo, KJ and KD Williams, as well as one in the night’s first match by 152-pounder Brian Guhtan in 28 seconds.

“We eventually got ready to go,” Anderson coach Sean Clark said. “It took some some coaching, it took some praising and some talking, but we did it. We ended up pulling it off.”

Clark said he did some experimentation with his lineup. He knew beforehand who was wrestling, but he wanted to see how his boys could do at different weights.

“We had everybody from 120 up (to 195) wrestling up a weight class,” he said. “Once everything settles down and once they get used to their weight classes and once we get into wrestling shape, we’ll see a different lineup and they everybody will go back to where they normally are.”

Some actually wrestled two weights above what they were last year and three Indians who did so won with ease.

Willie Dennison, a semistate qualifier last year at 113, defeated Xavier Fye 13-7 at 126 as the two renewed a rivalry . That was the only match that went the six-minute distance.

Senior Venice McCullough, moving up from 220 (the second-highest) to 285, took out Remington Miller in 71 seconds.

Another senior, Arthur Lucky, also advanced one weight to 182 and scored a 26-second pin over Noee Alreen.

Romello Williams stayed at 106 and needed only 20 seconds to hand Logan Flowers his first defeat in six matches.

Newcomer Andrew Dietz jumped ahead of Jonathan Stone 9-0 at 120 and finished it midway through the second period.

“We asked these kids to do something and each kid had a job tonight, and they executed that job,” Clark said. “We implemented a strength program, with an emphasis on getting stronger and being more match-ready, and I think it paid off today.”

Alexandria scored four pins, including Jaden Wood (6-0) at 113, 20 seconds into the second period over Zabriel Tolsten.

Mikey Smith got a third-period fall over Israel Dates at 170 and improved to 4-2.

At 195, Daniel Snyder recorded a stoppage in 43 seconds over Kagan Malone, and Max Nasalroad pinned Christian Chavez at 138 with 16 seconds left in the match. Jackson Humes (220) won by forfeit.

“I thought there were a couple of matches that got away from us that I would have liked a mulligan, a re-do,” Alexandria coach Scott Rowland said. “All in all, (the Anderson match) was a lot closer this year than it was last year. We’re making progress (but) we’re still making some silly mistakes.”

One match that the Tigers had in control but saw slip away was at 160. Carson Hartwell led Connor Poe 12-4 early in the final period, but a body slam by Hartwell led to Poe being awarded the win by disqualification.

Rowland said his team having to come back from Saturday’s matches and trying to make weight also had an effect.

Anderson will take part in a invitational at Wawasee and Alexandria’s next match is set for Nov. 29, at home against Oak Hill.