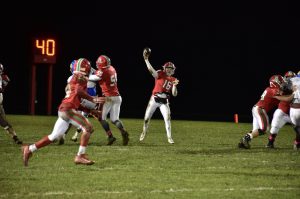 By George Bremer | The Herald Bulletin

ANDERSON — Xander Stokes is the best-kept secret in Madison County.

Any novice needed only to go out to Collier Field and watch a game to understand the senior quarterback’s physical gifts. The way the ball comes out of his hand, the windows he can throw it into, the touch he applies when the time is right … it’s all special.

But there’s so much more to the Anderson star than what’s visible on the playing field.

There’s probably a recent text exchange on there with Stokes, and it probably goes something like this.

“He’ll text me different formations and say, ‘Coach, what do you think this is about?,’” Qualls said Thursday as practice was wrapping up inside the high school’s auxiliary gym. “And it’s not even particularly our game. He’ll find a college game and college film, and he’ll text me and say, ‘What kind of coverage do you think they’re trying to play here?’ Just because he’s a student of the game, and he wants to learn.”

Stokes came to Anderson by way of Florida. But there were stops in eight other states along the way.

Indiana’s even been on the list before. Stokes lived here as a middle schooler, and his older brother Parker played for Qualls at Heritage Christian. It was evident then the younger boy would be an effective starting quarterback some day. For somebody. Somewhere.

But Qualls never dreamed it would be for him.

When the veteran coach decided to take the job in his hometown this spring, he got a nice surprise. Stokes father, Alvin, had a new job and the family was moving to Anderson.

And just like that, Qualls had the prototypical triggerman for his spread offense.

“I think it’s perfect,” Stokes said of his fit in the scheme. “A lot of it is getting the ball out quick. That’s what we pride ourselves on is being able to just drive down the field, 5 yards, 5 yards, and then like last week when we need it we can just go over the top. It’s really about what (opponents) give us, and it’s what we do.”

Last week was a coming out party of sorts for Stokes.

He led Anderson (3-7) to its third victory in the past four games and just its second postseason win since 1993. On Friday, the Tribe will travel to Class 5A No. 1 New Palestine in search of the first football sectional title in school history.

The Indians have that opportunity in large part because Stokes threw for 403 yards and five touchdowns in a 33-12 semifinal win against Greenfield-Central.

It’s taken time to get to this point.

Offenses are not built over night. There’s a trust that must be built between the quarterback and his wide receivers. And, even then, none of it works without the offensive line providing time to throw.

There’s been improvement on the latter front throughout the season. The former came somewhat naturally.

Malachi Qualls, the coach’s son, had some previous familiarity with Stokes. He now leads the nation in receptions.

Willie Dennison has gained confidence as his knowledge in the scheme has grown. Now he’s a big-play threat through the air and as a kick returner.

Octavous Anderson can flat-out fly. He’s also a duel threat in the running game, but Stokes pays him one of the ultimate compliments. The quarterback last played in talent-rich South Florida, and he believes his current receiver matches up in one of the most important ways.

It’s much easier to get Stokes to open up about his teammates than it is himself.

He comes from a football family. Saturday nights are spent around the television, cheering on Alabama with every member of the clan sitting in the proper spot.

The rest of the week is spent studying his craft. His father was a college quarterback at Louisiana Tech and UAB. He instilled a love for the game, and the younger Stokes estimates he threw his own first pass at age 6.

Will Carroll, a former Mississippi State player, trains Stokes in the offseason. He’s served as a kind of finishing school for the prolific passer, polishing his natural ability and teaching Stokes how to read those coverages he likes to text to Coach Qualls.

“There was no question that Xander was going to be a really good quarterback, at the right place, at the right time. I had zero thought process that he would ever come back to Indiana,” Qualls said. “All things happen for a reason.”

Indiana Wesleyan has interest. So do West Florida, Holy Cross and Murray State. Among others.

Then there’s the letters that have arrived from Mississippi State. Stokes plans to visit the school next month.

Playing in the powerhouse Southeastern Conference would mean sometime in the future, Stokes could watch Alabama from the other side of the line of scrimmage instead of the comfort of his living room.

The quarterback is taking his time with this decision.

He’s made enough moves in his young life to understand the importance of this one. There’s a lot to consider on and off the field — academics, Christian values, public vs. private among them — and there is no rush.

After learning four different high school offenses and waiting three long years for his chance to be a full-time starter, Stokes has one pitch for any school that makes contact.

There are some concerns about a lack of height and experience.

But adversity is a long-time acquaintance, and he knows how to move beyond it.

“It’s tough, but it’s all about how you respond,” Stokes said. “I’m just looking for somewhere that they’ll believe in me and they’ll give me a chance, even though I’m a one-year starter. And even though some colleges say I’m a little undersized, I just hope that they see past that, see the kind of kid I am.”