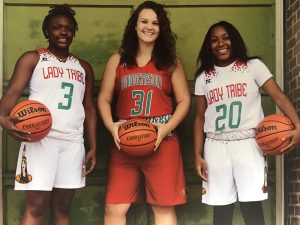 By Rich Torres | For The Herald Bulletin

ANDERSON — The Anderson girls basketball team isn’t going to intimidate anyone with its height this season.

With their tallest player listed at 5-foot-8, the Indians aren’t a towering presence. But those measurables aren’t negating the defending Madison County champions’ high ceiling.

With 5-8 sophomore forward Tyra Ford back and a handful of experienced upperclassmen paired with a whopping 10 freshmen newcomers, the Tribe is aiming high in 2018-19.

“We’re very aware of our height,” AHS head coach Shannon Cleckley said. “We’re definitely going to have to use ball pressure, traps, our speed and we’re going to have to convert on offense, if we steal the ball. We have a nice nucleus with the girls we have back. I think we have a nice mix.”

Led by Ford, who averaged 13.4 points and 9.3 rebounds per game, the Indians increased their win total from 10 to 11 to 12 games since Cleckley took over the program in 2015. That trajectory could continue, if the Indians can replicate their championship swagger from last winter.

Despite losing two seniors prior to the tournament, the program’s youth excelled en route to the Indians’ second title in three years.

Ford broke out with 22 points and 18 rebounds during the title game against Alexandria, which netted Anderson a 54-43 victory.

Yet, success wasn’t merely a product of a singular threat. While Ford turned heads as a freshman phenom, 5-4 point guard Staisha Hamilton, now a senior, and 5-4 guard Erin Martin also each played a role as the Indians turned the corner at the right time.

“I know we won it, but one could argue it was somewhat of a surprise because we had lost two starters the game before the county started and they were both seniors,” Cleckley said. “We basically had a couple of games before we got to the championship round to get things in order.

“Each one of those girls in a different game, contributed in a way that really helped us get to the top.”

Hamilton averaged 10.9 points while adding 4.2 rebounds, 2.4 assists and 1.5 steals a game. Martin dished out 1.5 assists and pressed the opposition for 1.8 steals on average.

Efficiency was essential for the Indians where Ford set the pace, shooting 42 percent from the field. Martin buried 36 percent of her shots from 3-point range.

The Indians won’t be one dimensional, however. Not with their stature.

“When we get up against some of those heavyweights, our defense is going to have to be crucial,” Cleckley said. “But this is one of our better scoring teams we’ve probably had in recent years. We’re not very big. We don’t really have an inside-out game. We’re going to be a very fast-paced team.”

Quickness will be essential, especially once February rolls around.

Unable to win a sectional game since 2013-14 – the last time Anderson claimed the crown – in-season development could end the drought.

“I want us to achieve another county championship, and one thing since I’ve been here that I haven’t been able to do is win at least a game at the sectional,” Cleckley said. “I think if we could win a game in the sectional in the sectional that we have – it’s a brutal sectional – it would really help to propel the program in a strong direction. I think that’s the one thing that’s missing.”

Sophomore forward Karlee Goodwin, who stands 5-4, sophomore center Makyra Dixon at 5-8, and seniors Kiersten Widup, a forward, and guard Lakevya Wills will be relied upon to help the Indians get postseason ready.

“We have a very strong core and we can score,” Cleckley said. “I don’t think scoring is going to be an issue for us. I think that’s one of our strongest assets. I think Tyra is waiting to explode. I hope that holds true.”

Ford posted 15 double-digit games as a freshman, eclipsing 20-points or more four times with a season-high 26 against McCutcheon on Jan. 19.

“We’re Anderson High School, so we’re always going to have a target on our back, especially in the county,” Cleckley said. “But the girls are up to the challenge.”

There’s nowhere to go but up.

“We’re not going to matchup with a team with size,” Cleckley said. “We’ve put an emphasis on our guards getting in there and rebounding with the best of them. I think in years past our guards have relied on there being one or two bigs doing all the work. Well, that’s not going to be an option.”

After starting 0-2 with road losses to powerhouses Pike and Lawrence North, Anderson will open their home schedule against Fishers Wednesday evening.

This article appears courtesy of The Herald Bulletin, which has covered AHS Athletics since 1893. Support local media by clicking here and subscribe today!