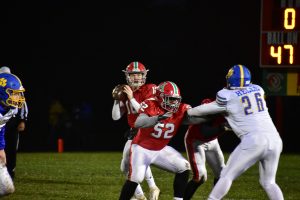 ANDERSON — It didn’t take long for the celebration to spill outside the playing field Friday night at Collier Field.

The hardy fans that braved cold-and-wet conditions were rewarded with a piece of history. For just the second time since 1993, Anderson won a postseason football game.

And it came in dominant fashion.

Led by senior quarterback Xander Stokes, the Indians (3-7) racked up 522 yards of total offense and routed Greenfield-Central 33-12 for their third straight victory and a spot in the Class 5A Sectional 12 championship game next week.

As players posed for pictures and celebrated with fans just outside their locker room, Octavous Anderson and Willie Dennison were nearly inseparable. The pair combined for 418 yards from scrimmage and earned every smile.

“This is the dynamic duo right here,” Anderson said while pointing to Dennison.

And no one would attempt to argue.

Dennison caught 10 passes for 164 yards and two touchdowns, and Anderson had seven receptions for 159 yards and a pair of scores while adding a team-high 65 rushing yards on 10 carries.

The duo’s prowess in the passing game helped power a career-high performance for Stokes. The transfer from Florida put an exclamation mark on his first — and only — season with the Tribe by finishing 26-of-44 for 397 yards and five touchdowns.

Afterward, he only wanted to talk about his teammates.

“(Dennison and Anderson) always tell me to throw the ball up and just trust them,” Stokes said. “That’s what I did, and they made the plays. And it all starts up front with the offensive line. They were outstanding today.”

Anderson credited the offensive line’s performance in part to a new blocking sled first-year head coach Ron Qualls brought in during the bye week between the end of the regular season and Friday’s sectional game.

“Our coaching staff is so exciting,” he said. “The energy they give us from the sideline is what keeps us going.”

The Indians wasted little time extending their lead after entering the period with a nine-point advantage. And it all started with a great effort from Dennison.

Anderson started the period with a first down at the Cougars’ 12-yard line and advanced to the 5. But a penalty backed the Tribe up to the 10 on fourth down.

Strong-footed placekicker Malachi Qualls — who doubles as the nation’s leading receiver — was unavailable for a field goal try after being shaken up on third down in the end zone.

With no choice but to go for it, Stokes threw the ball in the flat to Dennison at about the 8-yard line. After a couple of quick jukes, he surged to the 2 — where he broke a tackle and burst into the end zone for the score to push the lead to 27-12 with 10:31 remaining.

“It’s been a long time since we got to show Anderson who we are,” Dennison said of the football program. “I’m just so happy to be a part of this team.”

The Indians sealed the victory with a 2-yard touchdown pass from Stokes to Kishaun Lemon with 7:01 left to play.

The two late scores helped overcome a big second half from Greenfield-Central quarterback Gehrig Slunaker. He finished 22-of-37 for 223 yards with two touchdowns and two interceptions.

Anderson had one of the picks, and the other came from senior linebacker Raiden Davis.

Slunaker’s 10-yard touchdown pass with 1:15 remaining in the third quarter pulled the Cougars (0-10) within 21-12. But the Indians quickly slammed the door in the final period.

Slunaker’s first scoring strike was a 36-yarder to Jason Gray following a muffed punt in the first quarter. That gave Greenfield-Central a 6-0 lead.

It was short-lived. Stokes hit Anderson for a 50-yard touchdown 23 seconds later, and the Indians led 7-6 after one period.

Anderson caught a 32-yard touchdown pass for the only score of the second quarter, and the Tribe led 14-6 at halftime. A 13-yard scoring toss from Stokes to Dennison made it 21-6 with 7:26 to play in the third quarter.

Anderson advances to the sectional title game next week at No. 1 New Palestine (10-0).

“It’s just all about Coach Qualls,” Stokes said. “He comes in, and he’s really trying to change the culture around here. This group of guys really wants to compete and win. Anderson’s on the way up.”