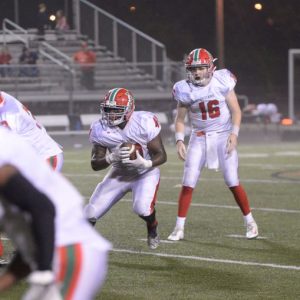 It’s the second straight win for the Indians, who held off Arsenal Tech 12-8 last week at Collier Field.

This one required a flurry of big fourth-quarter plays to pull off.

Stokes scrambled and found Octavous Anderson for 10-yard touchdown over the middle with 6:51 remaining, and Malachi Qualls’ extra point provided the margin of victory.

Richmond drove inside the Tribe’s 5-yard line in an attempt to answer, but the Indians forced and recovered a fumble with 1:32 to play. Willie Dennison’s key run to convert a first down allowed Anderson to run out the clock.

The Red Devils (1-7, 0-6 NCC) surged to a 20-6 second-quarter lead, but Stokes brought the Indians back with touchdown passes of 38 yards to Qualls and 7 yards to Arthur Lucky. The latter was followed by a 2-point conversion pass to Dennison that tied the game with 12 seconds left in the half.

Richmond broke the tie with a touchdown 8:58 remaining the fourth quarter, setting up Anderson’s rally.

Stokes also threw a 40-yard touchdown pass to Dennison in the first quarter.

Anderson (2-6, 2-4) hosts McCutcheon to close the regular season next week.