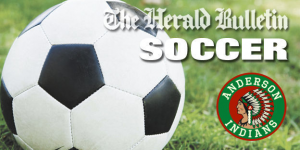 By Mike Battreall | For The Herald Bulletin

ANDERSON — Anderson’s boys soccer team last year was hoping to build upon a 10-win season with an experienced cast as well as a mix of talented newcomers.

It didn’t work out that way, as the Indians stumbled to an 0-7-1 start and finished 2-11-1. Anderson was also winless in five North Central Conference contests.

“A lot of things went against us last season that normally we don’t have to face,” Indians’ coach Chris Spolyar wrote in an e-mail. “Many of these challenges were self-inflicted.”

A key for a turnaround is having everyone on the same page as well as being able to play. Besides the coaching staff, leadership will fall to three seniors and three juniors, in particular.

Four-year veteran midfielder Luke Erny heads the midfield corps. Erny had a goal and five assists last year. Others stationed on that third of the pitch include juniors Alan Rodriguez, Rafa Garza and Miguel Contreras.

Senior striker Scott Amos (one goal in 2017) will be called on to carry more of the scoring load. Another senior starter will be center back Christian Contreras.

Depth will not be an issue, as the Indians will have about 30 in the program, varsity and JV.

“We are in a good place where our underclassmen can learn the game at the JV level before they are pressed into varsity-level play,” Spolyar said. “This team is excited, and motivated, to prove that Anderson is a consistently winning program,”

The Indians trained twice a week through the summer, with workouts intensifying as August approached. Anderson also played a couple of “friendlies” against other schools.

“The summer training is a great time for players to get extra touches in the ball before the fall,” Spolyar said. “For us to take a step toward the next level, however, our players need to play within the club system in the off-season.”

Spolyar listed five team goals, both on and off the field, as keys to the team’s success:

The Indians would like to win both the first match of the season as well as the final one before the sectional, as well as improve with each game, finish at least .500 and be in the top five in the NCC.

Away from soccer, the goals are having three Academic All-State players, seeing every player in the program remain academically eligible, completing a community service project, impacting the school in a positive way and developing servant leaders within the team’s players.