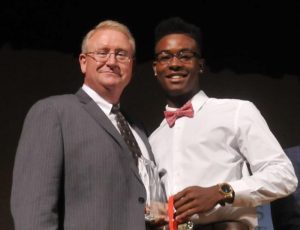 That was Jaien Webster’s response when the Anderson senior was named the Herald Bulletin Boys Track & Field Athlete of the Year.

He certainly earned that award, dominating the 110-meter hurdles this season, winning meet after meet, including the Madison County Championship and the North Central track regional.

With those wins in his hip pocket and a runner-up finish in the event at the IHSAA state track meet in Bloomington, Webster has also earned the inaugural Boys Athlete of the Year at the THB Sports Awards, held Tuesday at the Paramount Theatre in Anderson.

“It’s just unbelievable, I never would have thought,” Webster said. “I didn’t know what it took. It had never crossed my mind until later in the season. I thought, ‘Maybe I’m really doing something this season.’ It’s amazing.”

What Webster was doing was dominating the hurdles nearly every time he took to the track.

He was undefeated in regular season indoor meets, took first in the 110 hurdles at the New Castle Invitational and placed in the top five at the North Central Conference Championships.

At the Madison County Championships in April, although the Indians came up just five points short in the team competition, Webster was sensational.

He established a new county record in the 110 hurdles with a time of 14.42, over a second better than his Anderson teammate Stephyn McGhee, who was the runnerup. Then he completed the hurdles sweep in the 300 meters, finishing in 39.97, just a quarter-second off the county record and almost three full seconds ahead of the second-place finisher.

His speed was first noticed, not on the track, but on a football field, but he began running track as a sophomore as a way to stay in shape for the football season.

“People always told me I was fast in football,” Webster said. “But, I didn’t feel like I was fast because I always got caught. I thought about taking it to the track and I saw the competition and thought, ‘Yeah, maybe I can do this.’”

Webster caught fire in the postseason, establishing a new sectional record at Mount Vernon in the 110 hurdles preliminaries, running the event in 14.30, bettering the two-year-old record by over a quarter-second. He would go on to win the event with a nearly identical 14.33 in the finals. He would then repeat as champion the following week at the North Central regional, finishing in 14.38, earning a trip to the state finals.

“The guy who beat me last year (Pike’s Daryl Black), I texted him and told him that he wasn’t going to beat me this year,” Webster said. “He said, ‘We’ll see.’”

At the state finals, Webster was even better. He was the fastest in the preliminaries, finishing in 14.18, just .03 of a second ahead of Hamilton Southeastern’s Madison Jarrett.

In the finals, Webster ran a 14.13, but Jarrett, who will play football at Indiana University, was just a hair faster, at 14.02 to take the top prize.

“It was a sense of relief,” Webster said. “I had put in all the hard work, and it had finally paid off. I didn’t come in first, but it still felt great.”

Webster is headed to Vincennes University on a track scholarship, but felt that he had an added responsibility to the Anderson track team this season, in addition to dominating the hurdles.

“We had some new guys come out this year,” he said. “That was good, I could kind of show those guys what it takes to get to the next level. So, I got to mentor those young guys, it felt great.”

“I actually did it,” he added. “I made it to state last year, and that kind of opened my eyes. It takes more skill to finish higher and to the next level. That motivated me and my coaches told me what it takes.”