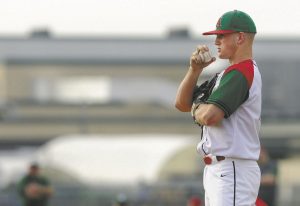 Pitcher Jacob Morris gets the save. Don Knight Photo

By Mike Battreall | For The Herald Bulletin

PENDLETON — With Anderson’s baseball team nursing a 4-3 lead over Pendleton Heights in the last of the seventh inning Wednesday, it came down to coaching, pitching, batting and base running.

Anderson exhibited the first two qualities well, while the host Arabians fell short on the latter two, literally so on the base paths.

Indians’ reliever Caleb Richardson came in for starter Jacob Morris and got the final three outs — two on a double play that included an unfortunate stumble by speedy PH runner Walker Stull — and Anderson held on and survived.

It was win No. 200 for Anderson’s Adrian Heim, who took over for longtime coach Terry Turner before the 2016 season after serving eight years as Elwood’s coach.

“It was nice to bounce back after that 17-strikeout (5-0 loss) Monday night at Shenandoah that we were all sick about,” Heim said. “Some really good things happened today and we hope to build from them.”

Heim felt the Indians (14-9) needed to make things happen early, and that’s what they did, with pairs of runs in the second and third innings as well as Morris and his fielders keeping the Arabians (8-12) in check.

Mike Stewart provided the initial spark with a two-run homer just about to straightaway center field in the second.

After catcher Cameron McGlothlin singled and pinch-runner Jordan Harris moved up on a wild pitch, Stewart launched Jordan Mitchell’s first pitch gone with the wind blowing out. It was Stewart’s fourth round-tripper of the year.

Brandon Branch led off the third with a single and Morris drove Branch home on a double to right. McGlothlin reached on a two-base error and the resulting run made it 4-0.

PH got on the board in the fourth, but it paid a big price.

Rene Casas, the team’s third-leading hitter, went down with an apparent ankle injury after reaching first on a bunt, and he left the game and did not return. Pinch-runner Gage Campbell would score on a single by Cole Miller.

The Arabians got to within 4-3 in the fifth, when Evan Douglas singled Stull home (Stull got a single and stole both second and third) and Kamden Early plated Douglas with a sacrifice fly. Douglas moved to third after Morris was called for two balks.

In the PH seventh, Stull, the first batter, walked. Heim then went to the mound and with a bit of reluctance took the ball from Morris. The senior right-hander struck out six while allowing seven hits and three walks,

Richardson, a sophomore lefty, was tasked with another left-hander at the plate — Douglas, the Arabians’ designated hitter and No. 1 batter in the order.

Douglas, who had two singles off Morris and also was hit by a pitch — hit a grounder to second baseman Brayden Warmer. Stull, on his way to second, lost his footing and was tagged out, and Waymire threw to first to complete the double play.

Richardson fanned Wyatt Douglas, Evan’s cousin, for the final out.

“(Morris) felt good going into the (seventh), but we wanted to make the move because we believe in (Richardson) and we gave him one batter,” Heim said. “We knew their running game went against us and we wanted to shut it down with the lefty, and we knew they had a lefty coming up and we knew the matchup was pretty good.”

Heim added getting the early lead was huge, especially with Morris pitching effectively. Morris, who had an earned-run average of 1.33 coming in, improved to 4-0.