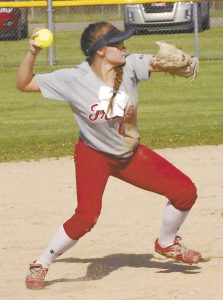 ANDERSON — Struggling with inclement weather and poor field conditions, the Anderson softball team appeared to be a ship foundering at sea four games into the season.

Seven games and seven wins later, the Indians appear to have righted their ship.

The Tribe now stands at 7-4 while New Castle fell to 4-9 with the loss.

The Indians carried a 6-2 lead into the sixth inning behind the strong pitching of Shelby Wright. But the Trojans put two runs on the board when an RBI single by Madie Harter became a two-run play on an errant throw from right field, cutting the lead to 6-4.

In the bottom of the inning, with one out, Sierra Cunningham and Kelley hit back-to-back home runs, and one out later Aly Milburn connected to extend the lead to 9-4.

Those insurance runs proved to be vital.

“I was really concerned when we got late in the game. I didn’t think that was going to be enough runs,” Anderson coach Mike Lee said. “Shelby is on back-to-back days pitching, and Emma is on back-to-back days catching, and it showed today. They were able to gut it out, and our bats were able to do what they’ve been doing since game five of this season.”

In the seventh, with one out, Wright walked New Castle leadoff hitter Alyssa Semler, who reached base all four plate appearances, before a fielder’s choice grounder put the Indians one out away from a win. But a single by Mariah Nicholson brought cleanup hitter Cameron Tabor to the plate. Tabor hit a towering drive to left which glanced off the glove of Kerrigan Huffman at the fence and dropped over for a three-run home run. Wright, however, bowed her back and struck out Haylie Graham, her 11th punchout, to end the game.

Wright was in and out of trouble most of the game. She had only one perfect inning, and she allowed the Trojans to put the lead-off hitter aboard in four of her seven innings.

But she made pitches when she needed to. Three straight strikeouts stranded a runner at third in the second, and after the first two batters reached in the third, she induced three straight popouts to escape trouble and got some defensive help on a double play turned by Jalin Smith in the fifth.

Kelley said Wright hung in after beating Yorktown the day before.

“I think she was a little tired after throwing a heckuva game yesterday,” Kelley said. “Her curve ball was really working both days, she kept hitters off balance and she really attacked the hitters with that curveball.”

After the Trojans scored a run in the first, Kelley got the Indians on the board in the bottom half. After Huffman and Cunningham singled, Kelley lined a two-run single to center field to put the Indians on top to stay. Her courtesy runner, Shamari Gipson, scored on a sacrifice fly by Milburn for a 3-1 lead.

Kelley, who also threw out a potential base stealer later in the game, said she takes pride in helping support her pitcher with the bat.

“It feels great,” Kelley said. “When they’re out there working on the mound, that job is tough, especially with kids who hit the way (New Castle) does. When you get a chance to get up there and make a difference, it feels great.”

In addition to the three late home runs, the Indians also scored three times via sacrifice fly. Milburn in the first, Kalin Hubble in the second, and Cunningham in the fourth gave themselves up to score a run.

“I’ve got a team full of sluggers, and I’ve been trying to make our offensive approach a little more rounded, just in case we see that pitcher that we’re not able to square up well,” Lee said.

Smith collected two hits, including a double, for the Indians while Savannah Coon and Shelby Southerland each walked twice and reached base three times.

Anderson travels to Hagerstown on Wednesday before hosting Friday’s winner between Arsenal Tech and Lafayette Jeff on Saturday at 11 a.m. in an NCC semifinal.