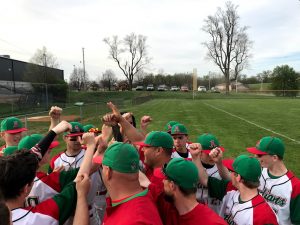 By Joe Spears | For The Herald Bulletin

After the team met up following their win, Morris ran from one foul pole to the other twice before jogging his way back into the infield. It was understandable why he may have had some energy left over. Through five innings of work, Morris only threw 61 pitches and both of his hits were no-doubt home runs that the outfielder never had a chance at.

“I’m a team leader and the younger guys look up to me,” Morris said. “It’s just a really cool thing to do the job from the mound and then produce on the offensive end. “

Early on though, it looked like Morris would have his work cut out for him. Muncie Central opened the game with a single and a walk to put the Indians in a troublesome spot early on. With one out in the inning and runners on the corners, a little blooper near first base and in foul territory looked like it was going to give first basemen Caleb Richardson some trouble. Instead, Richardson made an improbable over the shoulder catch and had the presence of mind to fire home and get the tagging runner out at the plate.

It was the last time Muncie Central would come close to scoring.

“The mindset was to go out there and be aggressive,” Morris said. “In the beginning I was letting them hang around but as I started settling in, my first-pitch fast balls were crucial. Once I got those going, that I would be in good shape.”

While he was dealing on the mound, it was also Morris that got the Indians offense going. With a runner already on, Morris sent a ball to left that carried well beyond the left field wall. A couple of errors brought in two more runs and after one inning Anderson led 4-0.

After a pitchers duel ensued for the next two innings, things started to unravel for the Bearcats in the fourth inning. The inning started off with a wild pitch that scored a run and ended with another wild pitch bringing in the final run of the night. The highlight of the inning came with a runner on second and Jacob Morris sending another shot, this one to the deepest part of center field.

“That ball to center field, that’s an Aaron Judge shot, lets be real,” Helm said, referencing the New York Yankee slugger. “Overall we hit the ball well, ran the bases well and put a lot of pressure on them. We made every play we needed to and if we continue to do that, we’ll be hard to beat.”

With the win, the Indians clinched the No. 1 seed during the conference tournament and will have home-field advantage throughout. For a team that’s gone 10-1 at home to start the year, there isn’t much more they could ask for.

“We’ve got a lot of work to do and it’s been a work in progress but we’re playing really well right now,” Helm said. “We don’t leave this ballpark for the next two weeks which is huge for us. We play well here so at the end of the day we feel good about ourselves.”